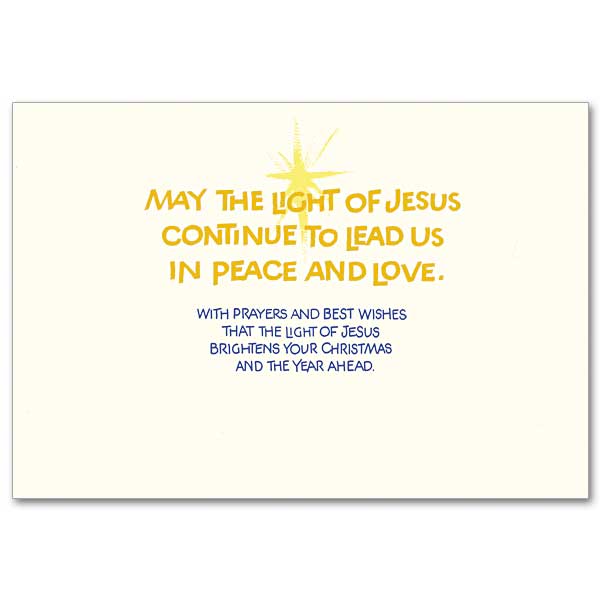 The Star of Bethlehem

Contemporary painting of the city of Bethlehem in earth tones against a deep blue sky with a brilliant yellow star. A pathway leads to the city. The text and accents are in dark blue foil.

A night scene of Bethlehem with a brilliant star shinding down on the city and illuminating the stable where Jesus was born. There are palm trees in the foreground. High Quality mid-priced Christmas Cards * Generous 5" by 7" size * 18 cards with 19 envelopes * All cards feature hand-done…

Painting of a distant view of the stable at Bethlehem beneath a brilliant star in the night sky. The stable is surrounded by buildings of the city and in the foreground are two palm trees. Related Products: PNAM

Delicate image of Mary and Joseph approaching Bethlehem on a donkey. A bright star lights their way. The city is visible in the distance.

The three Magi presenting thier gifts to the Christ Child. A shining embossed foil Star of Bethlehem enhances the cover. This image is a detail of the mural from the Basilica of the Immaculate Conception at Conception Abbey. 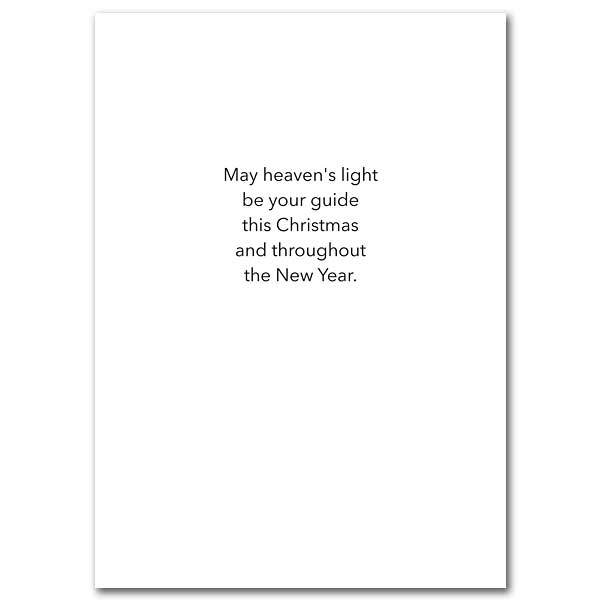 Three hanging star ornaments each with a scene in stained glass. The top ornament shows the shepherds beholding the star. The second shows a road leading to Bethlehem. The third is the nativity. 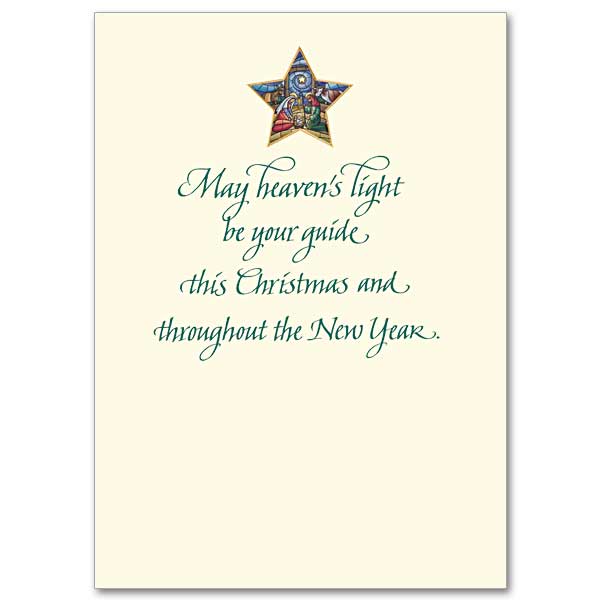 Three hanging star ornaments each with a scene in stained glass. The top ornament shows the shepherds beholding the star. The second shows a read leading to Bethlehem. The third is the nativity.

The story of Christmas is charmingly summarized in this simply-crafted piece. Both the Star of Bethlehem and an angel vividly garbed in white gown gazing upon Mary and Joseph, and the Christ Child in Mary's arms. A gentle call to celebrate the birth of Christ, this figurine reminds us of the…

…separate figure of the Star of Bethlehem, toward which the eyes of the Three are directed as they seek the newborn King. Extra frankincense and myrrh included (sorry, no extra gold). A stunning addition to your holiday home décor! Tallest figure is 10 1/4"; star is 12 5/8", boxed.… 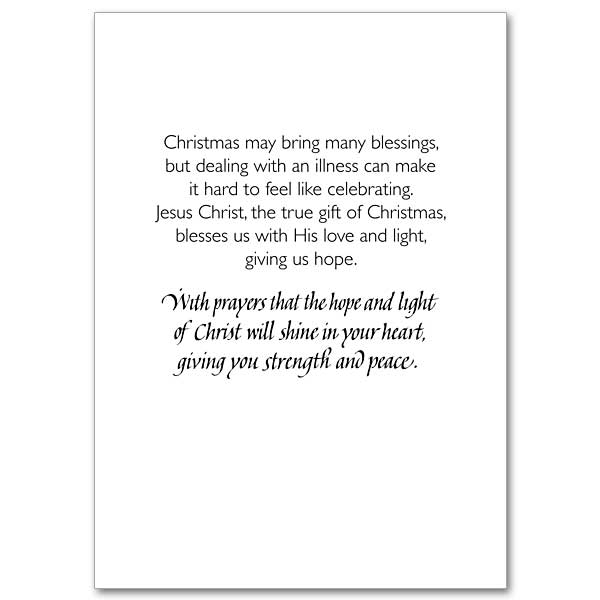 Thinking of You at Christmas

Star of Bethlehem shinging down on earth. 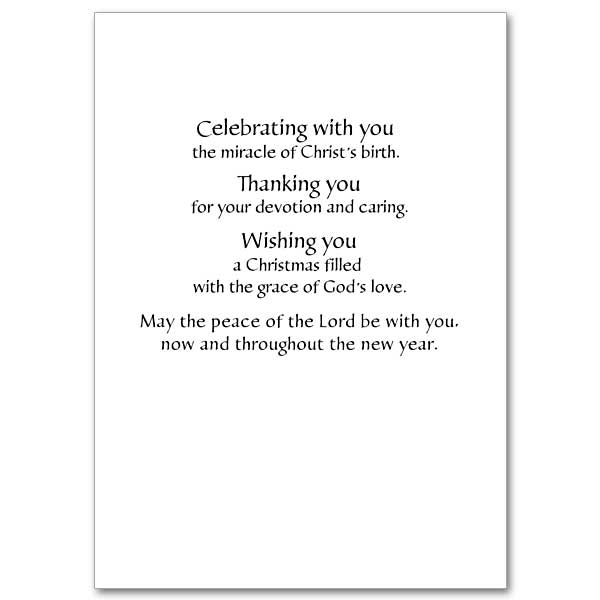 Christmas Blessings to our Deacon

Shepherds gaze up at the brightly shining star of Bethlehem on a deep blue background. 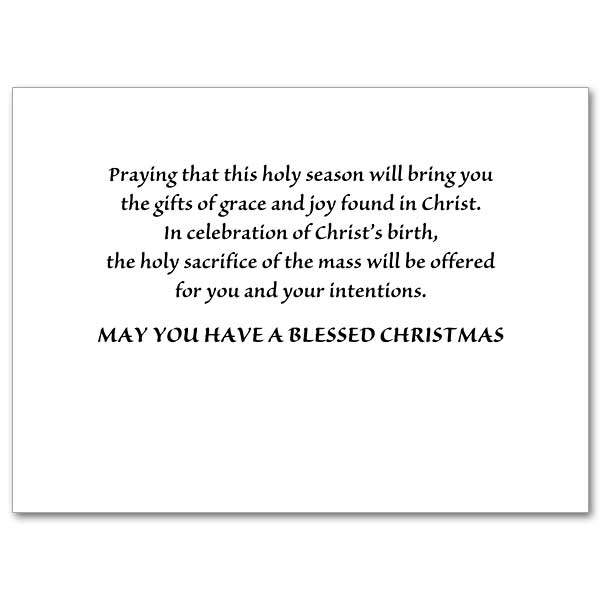 Mary holding Jesus while Joseph stands guard. The animals in the stable look on as the star of Bethlehem shines brightly at center top. 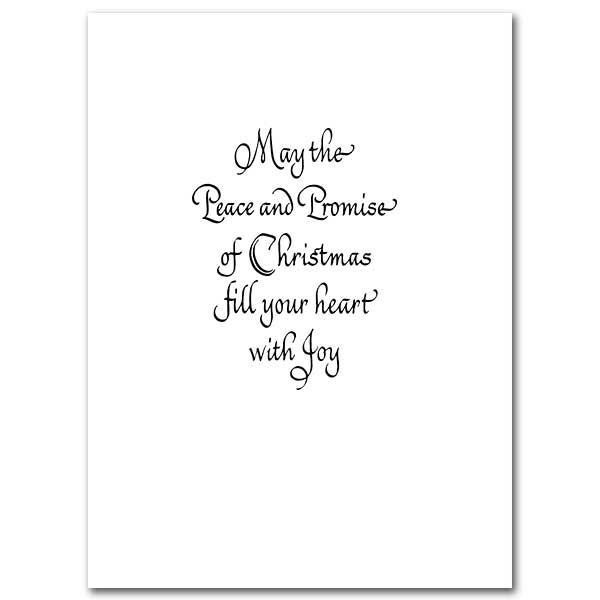 Madonna and Child on a blue background in a gold frame formed from four interlocking circles, with lines through it like a stained glass window. The star of Bethlehem is above. Related Products: A732 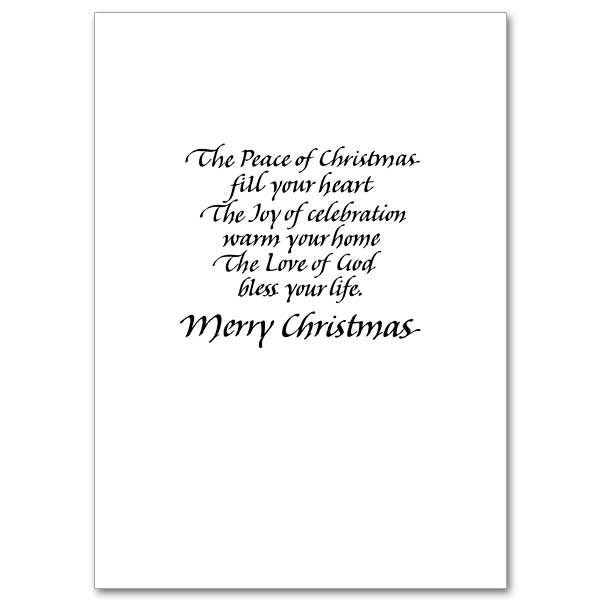 Image of a star over Bethlehem viewed by shepherds from the hills above the city of Bethlehem.

Lettering in the night sky with star above the city of Bethlehem.

This striking ornament features a lion and lamb together, a symbol of peace and the triumph of Jesus. The Star of Bethlehem shines above. Made of sculpted resin with a sandstone textured exterior that features a dove and heart. The richly painted metallic interior glistens with gold glitter accents…

…Night." Gift tags and tissue paper included. Large and small bags feature the opening lines of Silent Night. The medium bag shows the Star of Bethlehem. Gift tags are attached. All bags come with one package of tissue paper per bag in the color shown. Bag sizes are 5 1/4" x 7 5/8",…

…heavenly trio of beautifully painted angels will delight you throughout the Christmas season. Rich in symbolism, the Angel of Hope holds the Star of Bethlehem; the Angel of Joy cradles a cardinal; the Angel of Peace kneels in prayer. Elegantly done in the unique giclee process,a type of digital… 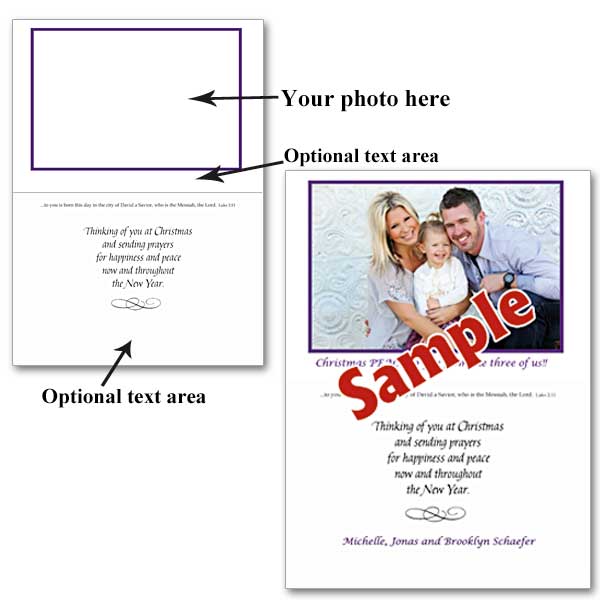 A Child Is Born

…per design plus $1.50 per 18 envelopes or part thereof. Joseph and Mary on either side the manger form a heart shaped window through which the baby Jesus is seen. A decorative Star of Bethlehem shining above. A decorative border surrounds the image in rich purple and gold. Related Products: NP69 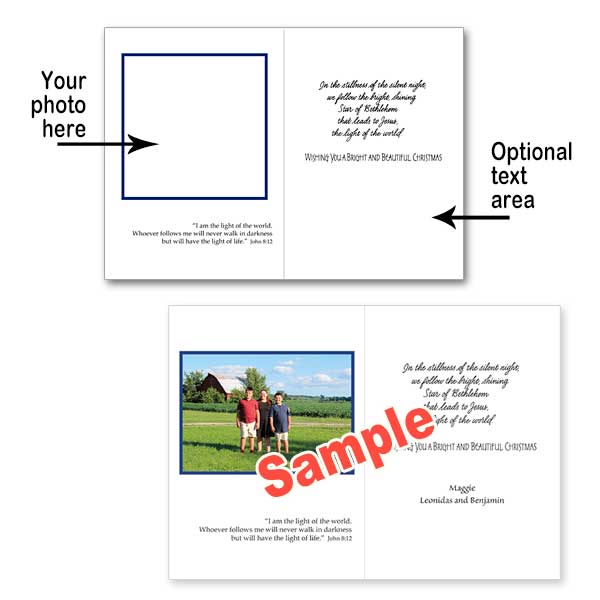 Contemporary lettering "Silent Night, Holy Night" written on a background of a star-filled night sky with a large central star at the top and a silhouette of the city of Bethlehem at the base of the card. Related Products: NP70 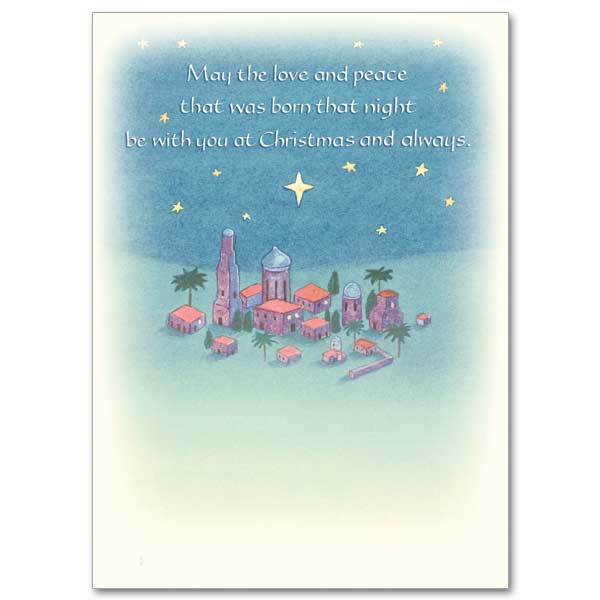 On One Gentle Night

A very simple cover consisting of lettering in blue with metallic gold stars. Inside the card is a painted scene of Bethlehem with the greeting positioned in the night sky. * 20 cards, 21 matching envelopes * Generous 5" x 7" size * Superb hand-done lettering * Inside text in color *… 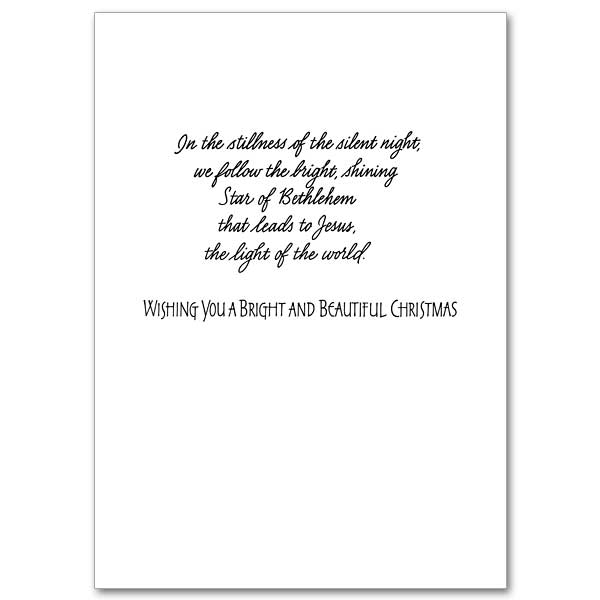 Contemporary lettering "Silent Night, Holy Night" written on a background of a star-filled night sky with a large central star at the top and a silhouette of the city of Bethlehem at the base of the card. Related Products: 70062 NP70

Contemporary lettering "Silent Night, Holy Night" written on a background of a star-filled night sky with a large central star at the top and a silhouette of the city of Bethlehem at the base of the stationery. Related Products: CB4224 CPB9 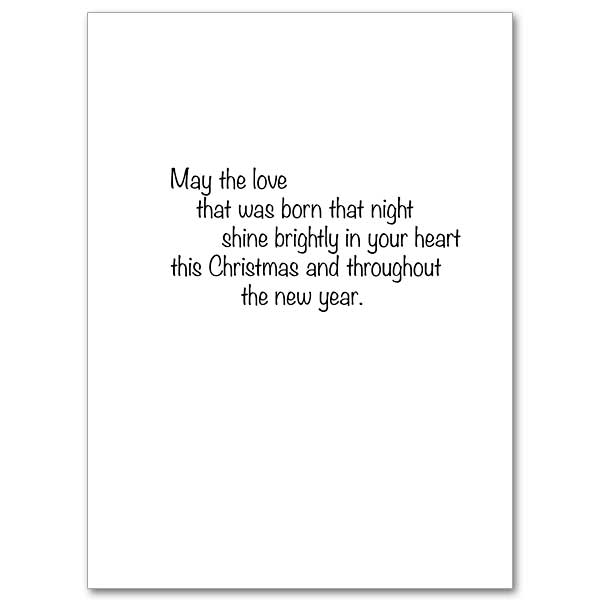 Three shepherds with sheep on a hillside near Bethlehem pointing toward a brilliant star in the night sky.

Bless You, Son, at Christmas

Image of two shepherds before a blazing campfire, observing a brilliant star above Bethlehem in the distance. 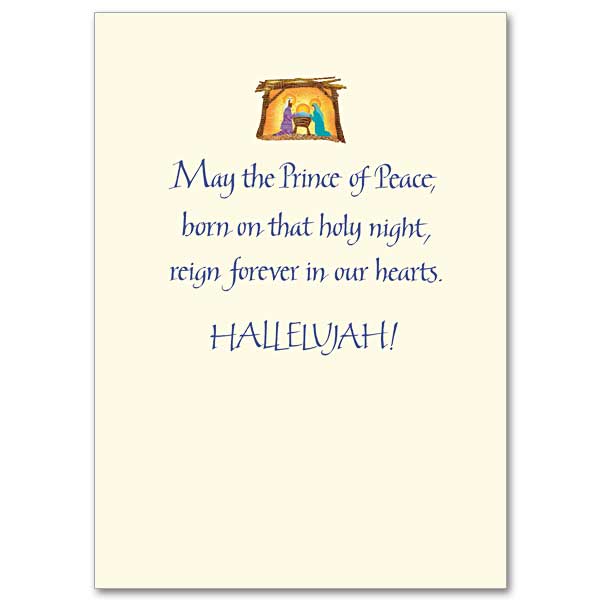 For Unto Us a Child Is Born

Central panel of nativity and stable framed by two palm trees with Bethlehem visible in the distance. A star shines from above. Three sheep look upon the scene. The side borders are of blue marbled paper.